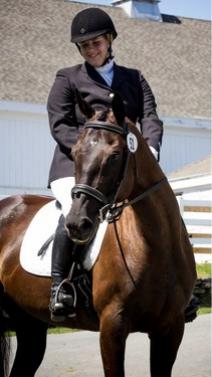 I had Cathie come out to work with my mare Layla during the winter to work on in hand issues we were experiencing. Layla developed a rearing issue after learning she could escape from her handler and run around the property. This behavior also translated into other issues we were experiencing during grooming and even riding. When I first watched Cathie work with Layla it was an eye opening experience. Cathie and Layla were able to communicate on the same wavelength just through body language. She worked her in her paddock prior to handling her during turn in time, and within minutes Layla gave up her dominating behavior and submitted to Cathie’s firm but approachable self. From there, we worked on the handling issues. Layla would try to run off, rear, go quickly in the barn, trot in place, you name it. Cathie stood her ground and performed various techniques to get Layla’s attention back and to learn to walk like a gentle lady. We then did work in the indoor and on the cross ties, and even within the two hour session I saw huge improvements with my mare. Following the appointment, I worked on the exercises Cathie assigned us and since then we have experienced no issues. Layla started to behave like a true professional, and when we went off property she behaved like a seasoned competitor despite having no show record at the time. We are having Cathie come back for a follow up, and I highly recommend Cathie to come out and work with your horse! Thank you again, Cathie! 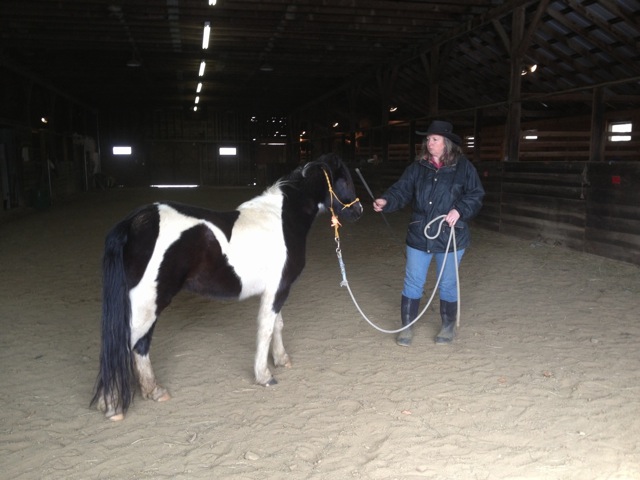 Desensitizing with the whip on the first visit.

Dear Cathie,
This is slightly overdue, but has the benefit of being time tested. I'd like to share my experience with you and "The Pony". Please share with others who would like to know more about your methods.

In early 2013, a long brewing problem exploded. I have a 13 hand gelding pony who came to me as an adoptee 5 years ago, with a tough guy attitude and a deceptively cute look. I stuck him in pasture with others and handled him infrequently. He was known as a pain in the rear and too pushy...and then it got worse. Or we noticed it did. In January, a helper I had on the farm told me that he charged at her in pasture. I brought him in to the barn and realized I had a big problem. Rearing, Striking, Biting, Mule Kicking, Cow Kicking. The vets and Farriers who know the pony said they really felt it was best to put him down - never seen anything meaner and perhaps he was brain damaged. I think they may have also been saying that they didn't think I had the right approach to deal with him. I've had horses for 40 years, but this little guy terrified me.

Cathie came 3 times and worked with him. I and my helpers watched agog as her "boss mare" approach reached him and he began to respond in a way that showed he respected her and was comfortable doing so. His defiance changed to respect for her, and for those who use her postural and attitudinal communication methods. This was in February of 2013. It is some 8 weeks later now and I can report HUGE progress. He is not easy and I am imperfect in my approach. But he respects my personal space, can be approached, haltered and led without drama and has not acted aggressively toward anyone since her 2nd session. This is dramatic improvement and I am committed to seeing this through -- but not on my own. This is as much an education for me as it is for him, but I really look forward to getting the pony to each next step of comfort and respect. I actually believe it's possible -- thank you, Cathie! 4/27/2013 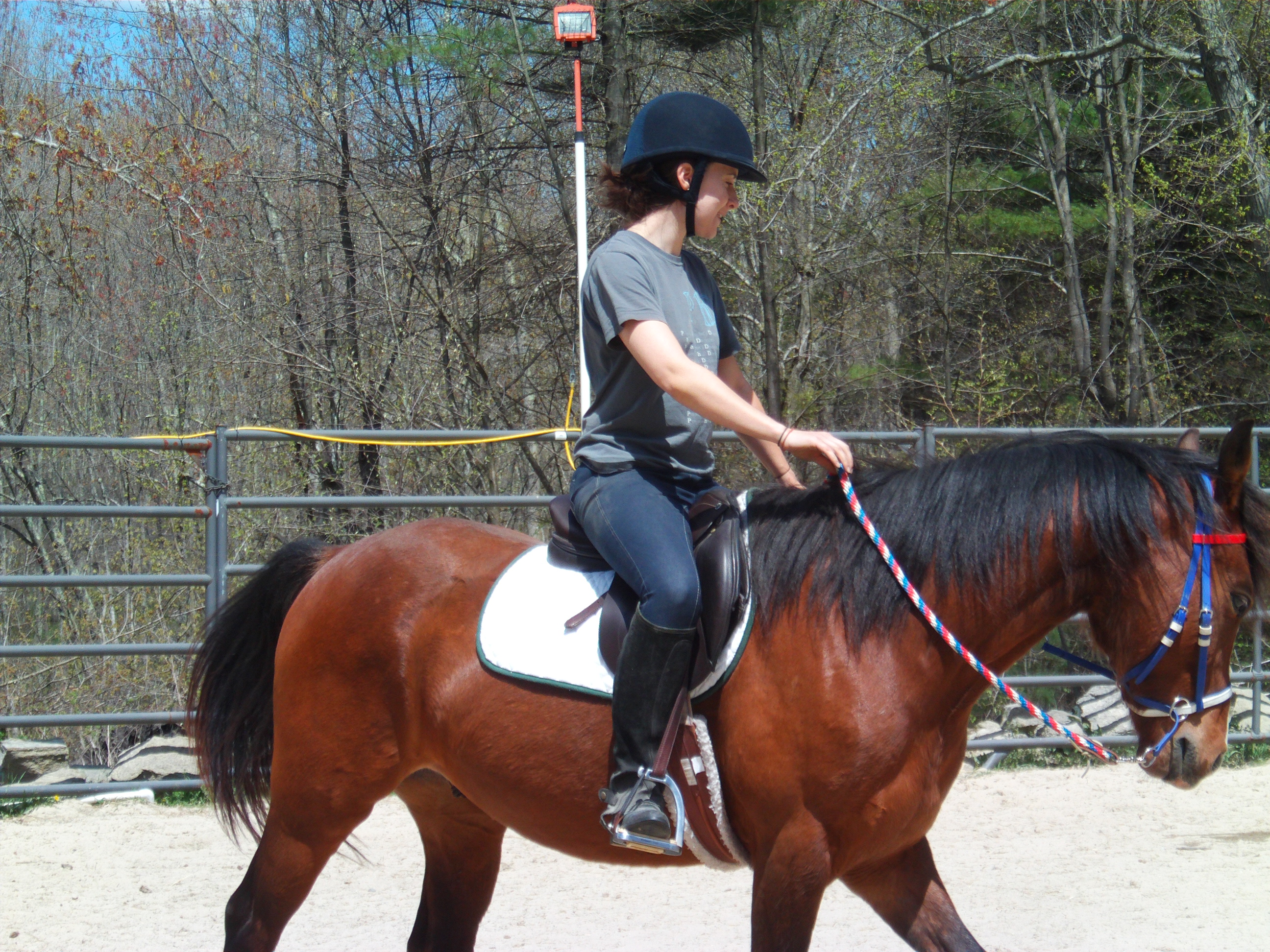 Cathie came out to help me with my very dominant 4 year old rescue horse. I have owned and ridden horses for 16 years and I have even backed a couple but none of them were ever so strong willed as William. In the two months I have had him he has managed to completely crush my confidence around horses He has been with me for two months and in that time it has felt like all we have done is slide backwards - to the point where I was struggling to even lead him. I also rarely worked with him for more than 30 minutes at a time because he would begin to shut down and get frustrated. Cathie worked with him for 2 hours and made such incredible progress with him! I had never been able to even turn him to the right and she had him leading and turning on a loopy lead rope and by the time she left we even had him going on the lunge a bit. I felt like we made so much progress just one visit and now I can't wait to see how William and my relationship begins to finally develop under her guidance.  Melissa Andreassi 3/19/2013

My rescue Gunner was having a behavior problems in general- and was rearing. I could not worm him,pick his feet, or get anywhere near his mouth. Considering the issues, I was too scared to ride him. I sent him to Cathie's and within a month he was a different horse. He stands for fly spray, lets me pick up his feet, and most importantly - stopped rearing and doing a jig under saddle. Cathie was willing to help me with the worst possible situation- dangerous behavior paired with a too-nice inexperienced owner. I believe that I got just as much out of her training (if not more) than my horse did. Rebecca Gregory

"After 20 years away from horses I purchased an 8 year old gorgeous Tennessee Walker mare and happily brought her home to Massachusetts. When she got here she started to kick, bite, charge and generally make everyone who came near her fear for their life. The vet indicated that there had only been two horses she was afraid of in her life and mine was one! Joy! I hired a local Natural Horsemanship trainer who toiled for eight months with no results (The last few visits she actually refused to get into her paddock as she didn't feel safe.) She said something was "genetically wrong or electrically" wrong with my mare, and to consider getting rid of her. I did think about it, but I had a gut instinct that the horse was good and just could not do it.

Then I came across Cathie's business card in a local feed store and thought I would give it one more shot. Well, it is no overstatement to say that Cathie worked absolute miracles with my mare, and in just two sessions she was walking nicely, lunging nicely, bathing nicely and generally being a wonderful girl. Plus, Cathie gave me confidence in myself and showed me techniques to communicate effectively with her, something that was equally valuable. The vet visited again recently (they were drawing straws to see who was brave enough to come out to our barn!) When she saw how my mare stood calmly to be examined she was dumbfounded and indicated that she could not believe that it was the same horse! I am so pleased with the work that Cathie does. She is the real deal in a world of trainers who pretend to know horses.

I was a little horrified and surprised at the feedback you received on your You tube channel about Gracie. Grace was a save from Camelot. People send horses to auction for a reason.  Grace sent me to the Emergency Room within the first week that I owned her.  I did not challenge her, in fact  I was just scrubbing the water tub.  She walked away from grain and she came after me. I suspect she has a lot of abuse issues.  She kicked at me and when I yelled at her for that behavior, she backed up and kicked me in the stomach, unprovoked. There is a foot print on my spleen and I could have bled to death if she had shoes on.  I had abdominal surgery less than one year prior. Just for clarification, I am a Trauma Certified, Emergency Room Nurse.  Not a push over. Born on a farm.  50 years old.  Not a newbie. Owned horses for over 20 years. I was going to put her down instead of sending her back to auction and giving someone else a dangerous problem like I had been handed. I've known you a long time. I figured that she at least deserved a real true evaluation by a professional.  I gave her the benefit of the doubt. even though I really wanted to put her in the ground after the damage she did to me. One session with you proved that Gracie was not dangerous, but had been mishandled and mistreated in the past.  She just did not know any manners or rules.  I can now enter her stall, feed her, and handle her without fear after one session.  I am still on guard, but this horse is at ease.  She knows she will not be beaten, mistreated or not fed.  It has taken almost two years, but she now calls to me in a soft nicker. I never thought I would hear that. She loves having her face kissed and being petted.I am looking forward to a lifetime partnership thanks to you Cathie.  Forever Grateful. Amy Beth Lane, RN 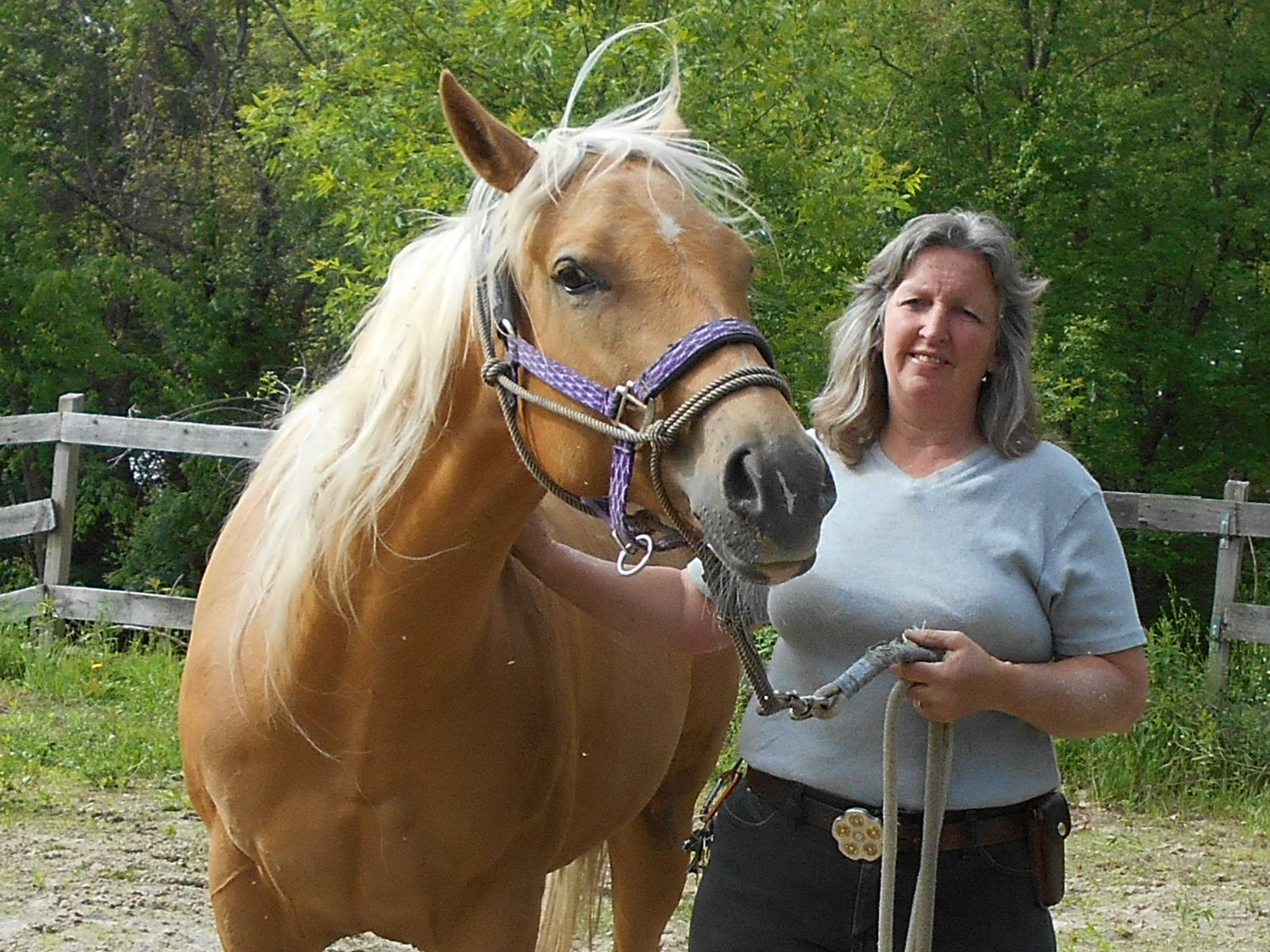 After being left alone for 1+ years, my mare became very aggressive on the ground - rearing, bucking, pushing through me, etc. Within 2 training sessions with Cathie, I am back riding her and she is awesome - obedient, quiet and a pleasure to ride. I couldn't be more pleased to have the horse I remembered back - THANK-YOU Cathie!!!! Joyce Upton, MA 9/30/2012