"The first time Cathie worked with Flaming Arrow was at a Kindergarten Clinic. She worked with him on manners including leading properly without crowding, lunging, walking over a tarp, general obedience work and ground driving. More importantly, Cathie taught me how to insist on good ground manners and how to continue his training.

I continued working with Flame, as Cathie taught me until he was ready for his first 'hitch' to the cart. Then I called Cathie again! Cathie first tested Flame to be sure he had the basics down right and then hitched him up to the cart! Thanks to the start he had, he didn’t fuss at all and remained calm even though we had to 'jerry rig' the harness to fit him.

I have watched Cathie work wonders with many horses and she certainly has 'the touch'. Cathie is assertive enough to leave no doubt to the horse exactly who is in control and at the same time seems to build the horse’s confidence by her reassuring touch. She never runs out of patience".
Bette Starr 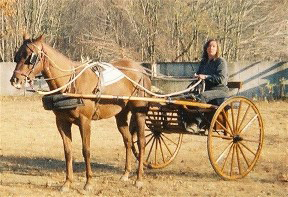