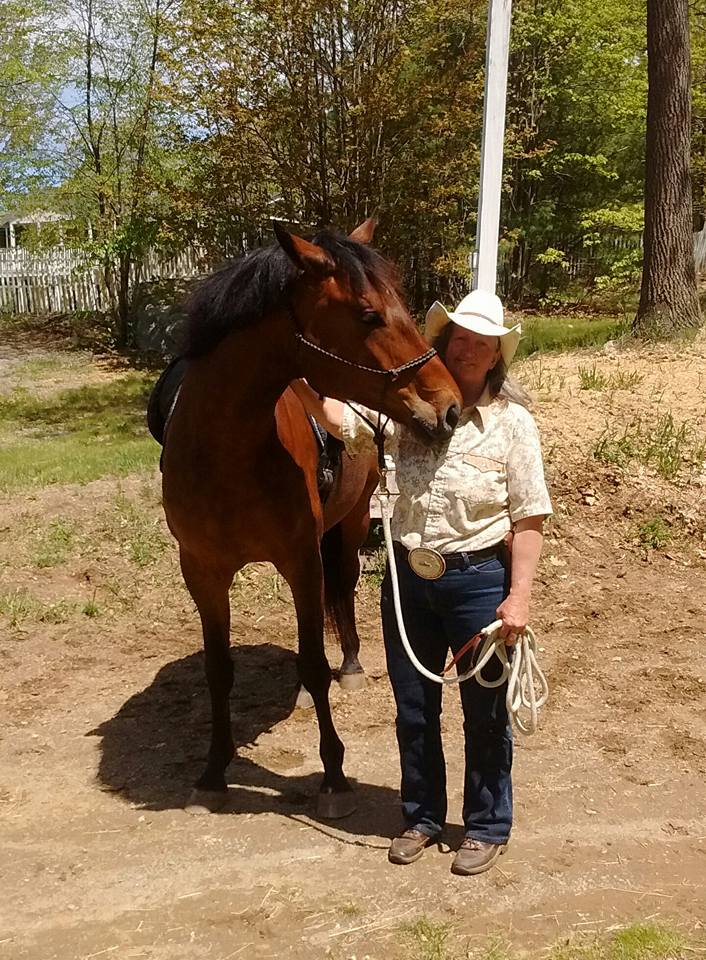 I would absolutely recommend Cathie to start your horse, solve a problem, or restart your horse.  I initially contacted Cathie last fall to help me with my then five year old gelding, who I have bought two years ago as a four year old.  The first year went very well and included dressage lessons and trail rides.  I gave him the winter off and started riding him again last spring.  I noticed instances where  I felt he no longer considered me as the leader, for example, he would try to walk through me at times.  Foolishly ignoring the voice in my head, I continued riding him and had a very bad fall last June.  I was unconscious so I really do not know the specifics of what happened.  After I was mobile in the fall, I had an experienced friend come to ride him.  My horse promptly bucked him off.  My horse had never bucked previous to the accident.  While some people advised sending him to a dressage professional, who I feared would just lunge the life out of him, I felt that was just not the right answer.

I believed I needed help to establish my position as leader in my gelding's mind.  After doing some research, I discovered Cathie.  The testimonials were excellent so I decided to contact her.  I first went to her farm for a horsemanship lesson, which gave me insight into her approach.  Cathie then came to my farm and started working with my young guy.
It was obvious from the start that my horse was terrified of the whip.  I had never carried a whip with him.  I had tried to lunge him when he first arrived (he was supposedly taught to lunge before he was shipped to my farm) but it was immediately clear that he was afraid of the whip.  So I did not continue to try to lunge him.  Obviously something happened prior to my owning him but we will never know what.
Cathie has been extremely patient when working with my guy.  She explains what she is doing and makes sure that I know how to do it correctly as well.  Last fall she taught me how to correctly move him and to lunge him at a walk.  We had maybe 5 or 6 lessons last fall before winter set in.  I practiced what we had learned through the winter.
We have now resumed weekly lessons and I feel that my young guy is progressing very well.  It has taken time due to his fear but he is becoming much more confident.  Lessons this spring have included things such as trotting on the lunge, turns on the forehand, turns on the haunches, and standing still at the mounting block (which he always did before the accident).  All this is in preparation for Cathie to ride him once she feels he is ready (i.e., totally safe!!).  While it was definitely not fun recuperating from my accident, I truly feel the most beneficial thing to come out if it was it caused me to have Cathie come to train my horse and me.  I believe that this training will enable me to have a long, safe, and very happy partnership with my horse!
In addition to working with my young guy, Cathie has been working with an older gelding that I adopted as he desperately needed a home.  This guy came with many issues, very little riding experience, and near zero respect for people.  I was aware of some of the things that had happened to this guy so that helps in understanding him.  For example, he had been "desensitized" to death so he was just dull to everything.  He has a good heart and I had promised to give him a home so I felt Cathie was our best hope in developing a better relationship.
Cathie has been working with this horse to teach him to have respect.  As opposed to my young guy who is so fearful of the whip, this fellow is absolutely not fearful and can be a bit belligerent (well maybe more than a bit!).  Training sessions thus far have included teaching him to move away as directed and to lunge at the walk.  In addition, this guy was terrible with the farrier and Cathie worked with him in that area.  He is now far more cooperative with the farrier.  He is definitely making progress and we will continue the lessons, hopefully ending with him bring ridden!

I am very grateful to Cathie for helping me with my two horses.  She is an excellent and patient teacher - both for your horse as well as you!! Marsha 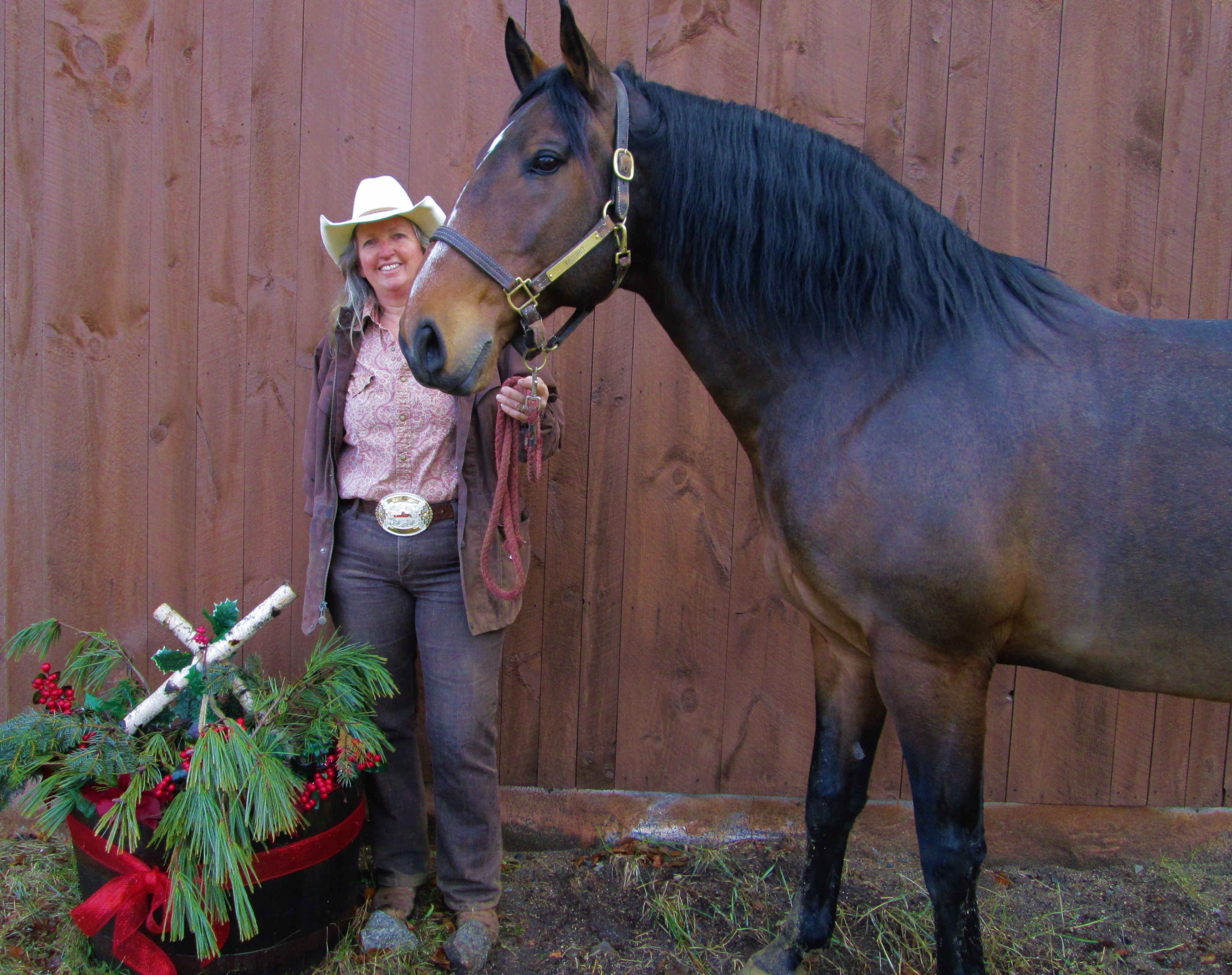 Dear Cathie, I'm taking this snow bound opportunity to share my gratitude for your training help with my two dressage horses.  Truth be told, when I called this fall, I was so angry and frustrated I did not think there was anything that would help me. Desperation is a powerful motivator for change and learning, and that was the mood when you stepped on the scene.  My oldenburg has shown PSG, but his periodic spooks made me so angry with him it got in the way of all our training.  My naturally gifted lusitano and I managed to score well at 3rd level, but his hysterical reaction to cues was undermining our training, too.  Logically, the common factor was me, and I was FURIOUS that for all my study, practice and care, my horses were telling me I wasn't good enough.

Who ya gonna call?  (Ghostbusters)  Colt starting, problem horse professional, gun toting (in case I needed to be put out of my misery), spook proofing Cathie Hatrick Anderson.  Because my problem was not performing FEI dressage movements; my problem was that my horses stopped listening to my cues.  I won't bore anyone with the details of unraveling this tangle of emotion or the exercises to get 100% of the horse's mind on the job.

What I would like to share with the readers of your testimonial page:  Keep it simple, get observable results and always do your homework.  Cathie is uniquely effective because every training session will include all of these components.  She expects to help her students over the roughest patches by teaching them to handle the bad times exactly as she would:  Safely, confidently and with compassion for horses and their people.Many Thanks,Lee Metzger 2/15/15 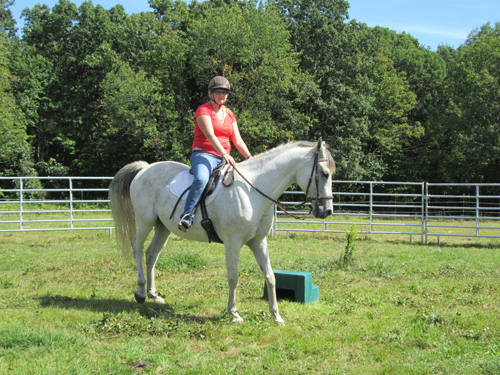 Cathie has such an amazing way with horses and explaining her methods as she puts them to action. Every step is broken down so even the newbies understand the whats and whys to her methods. Our horse had major issues when he came to my mother in-laws. He was very frightful to pretty much everything. Cathie took her time with him each week and she gained his trust and respect. Cathie gave me the right tools so I could practice on my own time and each week showed great improvement. He now  lunges, turns to the right, picks up his feet without issue and is getting use to carrying a rider, and so much more!!! I highly recommend her to anyone with horses. There is not one person out there that could not benefit from her experience and training techniques!!! Natural horsemanship is the way to go!!! Daron Minor

Jumpy and Fearful of tack, whips. 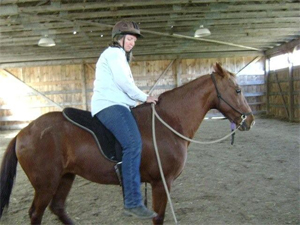 Hi Cathie! Just want to let everyone know you are the best! I was at a standstill training my 3 year old Tennuvian, Paqo. You were fantastic and patient with him and ME! Now we are out of our rut and on the road to hit the trails.. Looking forward to your coming and giving him his first real ride.. Your compassion for horses is endless..(and their owners that have spoiled them!) Also, you were wonderful with my rescued MFT Rhythm, you fully understood her fears and anxieties, and was still able to get on her and ride her without her getting all upset, as I was told she needed to be headed to keep her quiet.. Obviously NOT! Your the best.. cant wait till we see you again.. Renate, Paqo, Rhythm Mont Vernon NH

Update. The second real ride went great. We were able to ride around the indoor, halt nicely and remount to ride some more. Paqo will soon be hitting the trails. Cathie

After a lot of dreaming in my youth of someday owning a horse, I finally came to own a handsome 9 year old Tennessee Walker, that I named Aengus (in Gaelic this means one’s choice). I traveled to Tennessee to see Aengus, and at the time he was emaciated, broken down and I was told he worked about nine hours a day, either driving a buggy or trail riding. He certainly looked worked, but, I fell in love with him, his eyes were so soft and I knew I could give him a better life.

After a few months at the farm in MA, Aengus put on some weight, began feeling settled again, and for a short time, we were riding nicely together. But something was happening to him, slowly, that I just could not understand. His mild manner off saddle became a nightmare under saddle, and there was no warning. I knew, as a novice, that I needed help or the situation may become dangerous for both Aengus and myself. Then I thought I waited too long, as he almost threw me, after spinning and spinning, so of course I got off of him, never to return. So, I was not sure if he now had my number, or if his hard life somehow was coming back to him, and he was fleeing what he thought was the long hard days of work. Either way, I knew I needed Cathie, and I needed her asap.

Cathie’s plan for us – we were to get back to groundwork, quiet groundwork that we needed to absolutely excel at before thinking about getting back in the saddle. Aengus and I, after Cathie’s instructions, began working quietly. We lunged, but only at the walk, never anything faster. We walked with a lead, quietly, spending hours softly talking to Aengus, trying to reassure him that nothing terrible was going to happen to him. Cathie then began working Aengus without a lead, quietly working him at liberty, and it was truly amazing – he never wanted to leave her side, and actually calmed down enough to enjoy himself at this work. Aengus and I continue to work this way, and I cannot tell you how enjoyable it is, for both if us. It builds my confidence up again, and I know it does the same for Aengus.

Cathie has come to work with Aengus at another level, one exclusively given to her as a trainer, but one that I am so excited about – Cathie will now drive Aengus, and with each drive, he improves ever so much. More exciting, Cathie is now able to ride Aengus, quietly as ever, as Aengus does not feel the need to bolt, spin or rear with Cathie . With every ride, she works with him, reading Aengus’ needs, and over time, I will do the same. This is just a dream come true for me, much like those dreams of my youth, and I need to thank Cathie for making this one come true. 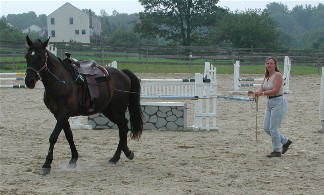