Ruger was amazing. I think they have a problem with their scoring system?? 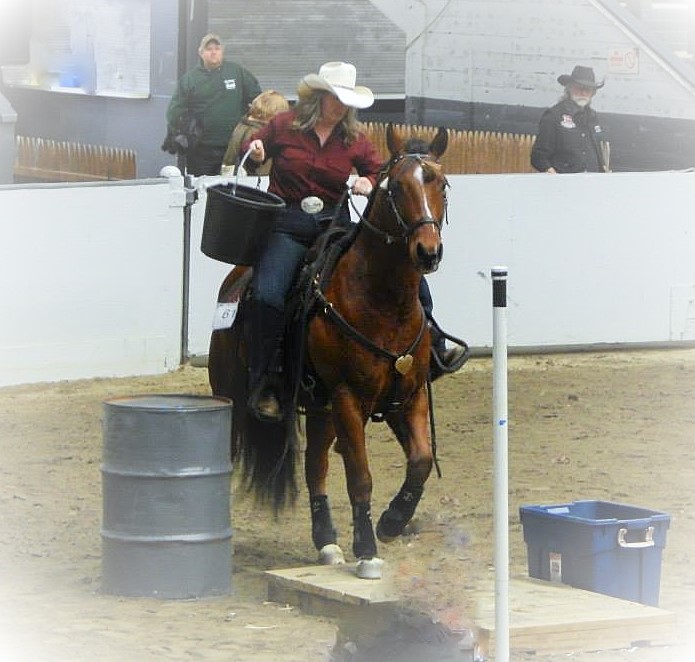 2013 Ruger and I were 17th to go, at that point only 5 riders had even made the time. 11 others had timed out, with only 13 riders to go making it well within the alloted time, I was elated with the thought of making top ten. Well many riders just started skipping obstacles so they would make time. Of course you can get a faster time if you just pass by obstacles you are having trouble with. So once again it was all about time, more than horsemanship.

With a big crowd, enthusiastic competitors and great weather, the 2015 Extreme Trail Challenge was a fun event for everyone. The theme for this year's course was “Medieval Times meets the Old West”. All the riders enjoyed taking their turn at jousting and sword play, and then making their way through the course to the last obstacle where they unsaddled and rode bareback. For the second year in a row, Cathie Hatrick-Anderson came out on top. (Yep, she's that good.) The list below shows how close the scores for top prizes was. It was a great showing by all the riders. -submitted by Doug Smith 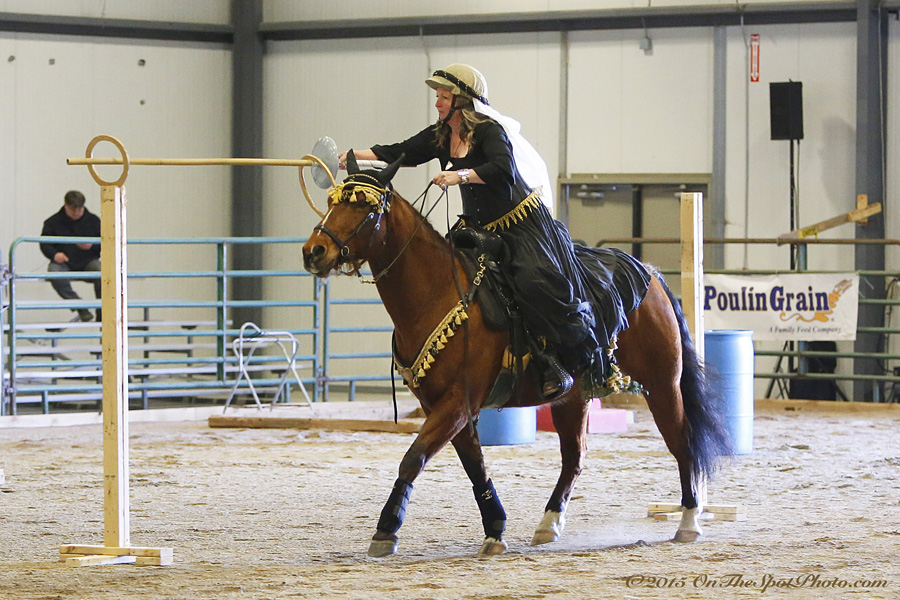 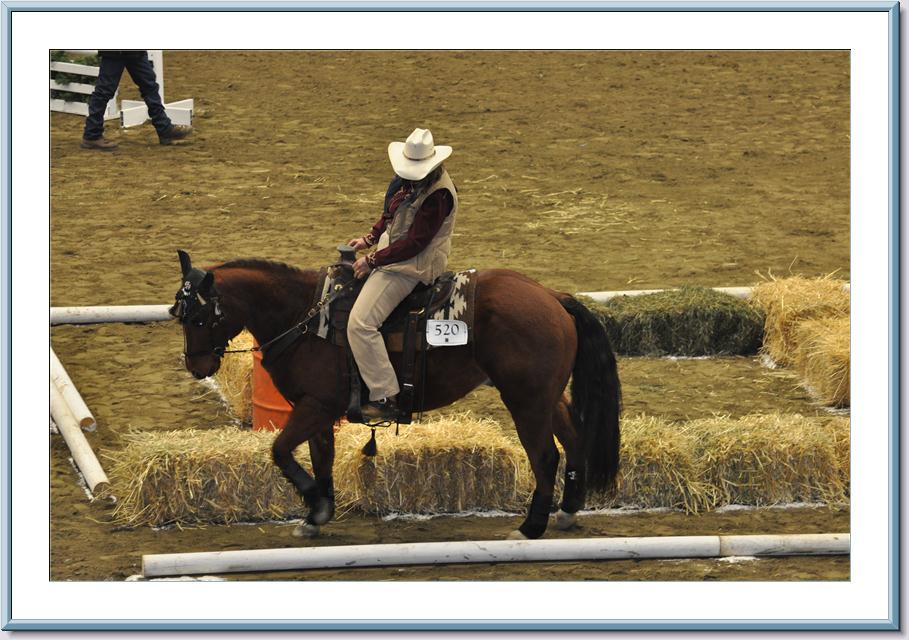 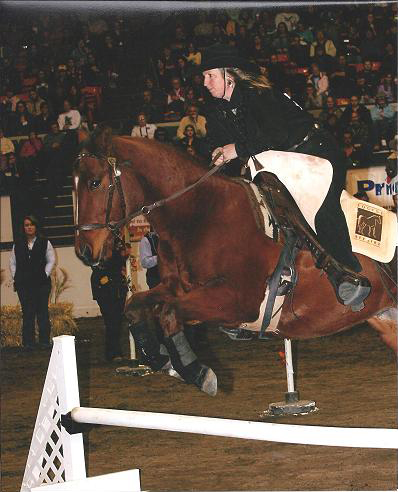 2009 Ruger and Cathie placed 21st out of a field of 30 Ruger was the youngest horse entered- Cathie and Cachina placed 22nd.

2008 Dicaprio and Cathie placed last, we were just shy of the time limit causing disqualification.

(He still did his best as a former dressage horse with "baggage" he really made me proud!)

Less is More: Horses and riders prefer a bridle with a bit missing 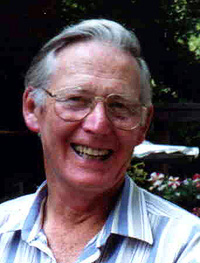 The bleachers continually filled as Dr. Cook began his lecture on the effects of bit use, in the Mallory Demo Ring at the New England Equine Affaire on Saturday. As a lovely black and white paint, Cachina, stood almost snoozing with her owner and trainer, Cathie Hatrick-Anderson, Dr. Cook began to go through his long list of issues related to the use of bits, and the benefits of riding with the Bitless Bridle.

Dr. Robert Cook is a renowned veterinarian and author, who has been on the faculty of clinical departments in schools of veterinary medicine in the US and the UK, including Professor of Surgery at Tufts University here in Massachusetts. His book “Metal in the Mouth; the Abusive Effects of Bitted Bridles” is filled with information from his research of bit use. While Dr. Cook explained that the horses mouth is one of the most sensitive parts of its body, Kiersten, an assistant passed around 2 skulls; one of a pony that had never had a bit in its mouth, and one of a horse that had regular bitted bridle use. On the bitted horse, you could see bone spurs that had developed along the bars where the bit had lain.

He explained how pressure from a bit, not only, but especially in the wrong hands, is not just uncomfortable for the horse, but also interferes with the natural process between the breathing and eating mechanisms of the horses’ airway from their nostrils and mouth. The salivating and chewing that a horse does with a bit is an eating response. Yet, when a horse is being asked to exercise, it needs to use its airway in response to the exercise. It cannot, and should not be asked, to eat and run at the same time.

Hands from audience members ersistently raised as the doctor asked for responses to a list of behavioral problems that any had experienced with their horses. He explained that many of these problems were due to horses anticipating pain and discomfort they experienced from the bit. A horse cannot “think” when it experiences fear, and therefore exhibits such behavior as bolting, rearing, head shaking, and so on. Eliminating the pain in the mouth, and subsequently, the fear of the pain, makes the horse not only more comfortable and healthy, but ultimately a more willing partner and student.

Dr. Cook went on to explain the mechanics of the Bitless Bridle, while Cathie and Cachina demonstrated easy and willing flexion, and responsiveness to rein work. Dr. Cook explained that the bridle worked by using steady pressure on the sides of the horse’s head to direct her with a painless yet persistent “hug.” Steering, slowing and stopping were effortless and smooth. Cachina’s headset and neck flexion was naturally relaxed, as opposed to the exaggerated poll flexion, where you see spit flying and swishing tails; all a reaction to lack of oxygen in the horse’s airway. The pair demonstrated these exercise at both a walk and trot, in the smallest of demo rings with Dr. Cook and his assistant standing alongside. Cathie informed the audience that her mare had never been in a setting like the one that day, and it was impressive to see her so relaxed, responsive, and content.

After a 45-minute informative lecture, and some questions from the audience, a crowd moved to an outdoor ring where Cathie and Cachina were able to demonstrate on a larger scale. The audience could see the bitless bridle in some larger scale work and Dr. Cook answered more questions. It was interesting to watch as they worked on speed control, steering and other flat work in a ring with other horses and riders at work. Cachina was a willing and obviously relaxed partner, responding to whatever Cathie asked, familiar or not, and was nothing short of successful. 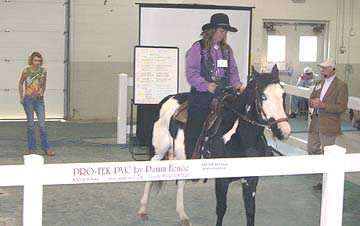 There was a lot of concentrated interest from audience members. The information Dr. Cook shared from his many years of research and work certainly had an impact on the participants in his clinic. The idea of taking the bit out of their horse’s mouth may have been an idea that some anticipated being a hard sell, but the facts presented were simply too astonishingly real to deny. In a circuit where so many rely on the old and familiar, it will be interesting to see where Dr. Cook’s evidence of the harm that bits cause will lead the horse industry.

For more information you can visit his website at http://www.bitlessbridle.com
Article written by Judy Paglia

Dec 2005 - Dr Cook appointed Cathie as his first BBI (Bitless Bridle Instructor) in the United States and abroad. Don't forget to mention my name Cathie Hatrick- Anderson, and my BBI number ( 001 ) when ordering your bitless bridle!
Cathie rode Renegade's Zeus in the North American Spotted Draft breed demonstration.
The bitless bridle works no matter what size your horse is...

Cathie rode Renegade's Zeus in the North American Spotted Draft breed demonstration.
The bitless bridle works no matter what size your horse is... 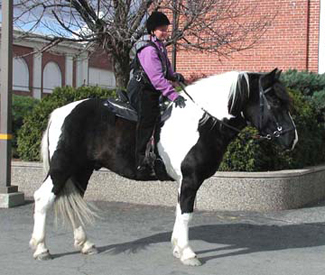 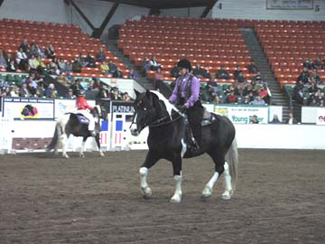 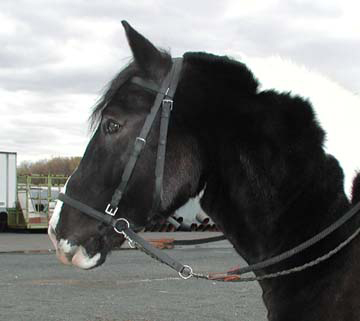 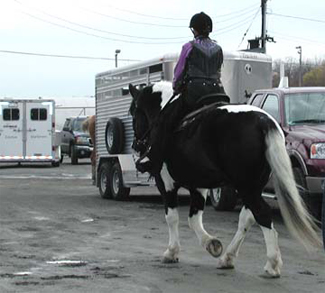 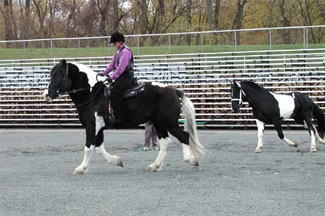