Out of Control Hanoverian 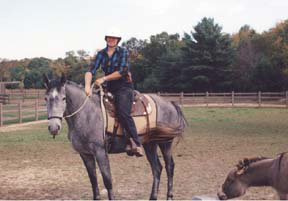 This is Mirror's first time under saddle!

I would recommend Cathie Hatrick-Anderson to anyone needing any sort of horse training. I own a now two and a half year old Hanoverian mare named Mirror. She was somewhat easy to handle as a yearling. However, as she turned two she had different ideas. She wanted to run the show including me also. Because she is my first baby, I was letting her do so. As things got more out of control, I called Cathie. After just her first visit, my horse and I were back on the right track. She quickly showed me how to get Mirror to work with me willingly. She is very sensitive, so trying to force her to do things is not an option. Cathie doesn't train that way. Her methods enable the horse to clearly understand what is being asked, making the ability to respond easy. She showed me things I was doing incorrectly and taught me how to do them the right way. I used to almost dread working with my horse because of not knowing what to expect. Now, I really enjoy each training session we have. Before, I had trouble catching Mirror. Now, she waits expectantly at the gate each day. I think she likes to work because there is no fear or tension involved. I avoided trailer loading as long as I could. Because of Mirrors sensitivity I assumed she might panic and then who knows? Cathie came and first did some ground work in the arena. When it came time to load, Mirror walked right onto the trailer. I was amazed. I could go on about Mirror running over the vet and so on. The good news is, she doesn't any more. I really enjoy working with Cathie, and think you will too. She is very down to earth and easy to understand. She has made training my horse a true pleasure.

When Cathie first rode Mirror there were no problems. She accepted having a rider just fine, without any nervousness or aggression. I think she was so well introduced to all the ground work and aids that she responded just as willingly having someone on her back. She continues to progress each time she is worked. I would recommend Cathie Anderson to anyone needing training or retraining help.