"Paris is a 6 yr old Spotted Draft horse who had never been under saddle. With Cathie's firm, but gentle training methods, Paris was willing and never fearful of having Cathie as her first rider. Amazingly, it took little more than an hour!

She also started my gelding Zeus under saddle. Because of the groundwork Cathie did with him, he accepted the saddle and bridle in a heartbeat"! 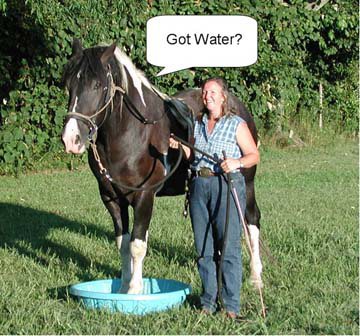 I found my trainer in the Want Advertiser! 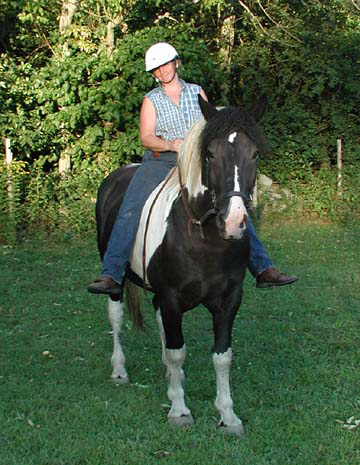 When I bought Zeus at 5 months old from Wisconsin, I knew nothing about raising foals, let alone big, draft foals. I had various 'regular, older' horses over the years, but this was my first shot at raising my own. He was a good boy - learned to lead, pick up his feet, bath and was generally easy to work with. Before I knew it, he was a 2 yr old stallion (we intended to do a little breeding) who needed to move along to the next step of really learning the ropes. I knew that I needed help in starting him with ground driving in preparation of riding and pulling light loads. I had seen Cathie's ad in the Want Ads and bypassed it for awhile. I kept seeing it and said to myself: "Do I really want to find my horse's first trainer thru the Want Ads? Who is this person?". I put the Want Ads away again. Finally, really wanting to get Zeus going, I did the unthinkable: I called Cathie. "Gee, not so bad; she sounded nice".

Folks - the rest is history! Cathie turned out to be a wonderful trainer; someone who was right up my alley - kind and understanding with horses, simple in her teaching techniques and super knowledgeable about all sorts of horse stuff. She worked with Zeus and over the years we have done great things: Equine Affaire for 3 years and an American Warmblood Inspection. After 2 lovely foals, Zeus is now 5 yrs old and gelded. Cathie is training him to ride under saddle in Dr. Cook's bitless bridle. I don't see the need to put metal in his mouth and he is responding very well. We also use rope halters around the farm so he is used to giving to that type of pressure. Zeus is progressing well and Cathie will be riding him at the 2005 Equine Affaire Spotted Draft Breed Demo in the bitless bridle.

So, for those of you who wonder what a trainer from the Want Ads is all about - give Cathie a call. You'll be surprised too! 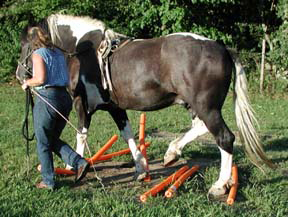 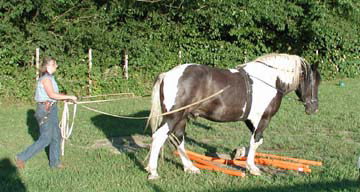 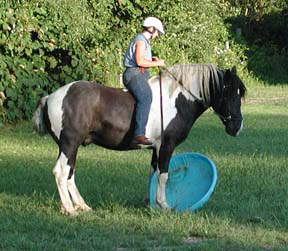 "AJ is my second horse, but my first baby. I had a session with Cathie at my house when AJ was just about 7 months old. I learned from her how to handle him to gain my respect and trust . She went thru the steps of what NOT to allow him to get away with and what to expect from the stages he would go thru! She not only showed me but had me work with him while she was there to make sure I got it!  I absorbed everything she had to offer and used it throughout the next 2 years. At two and a half years old, I felt he was ready to start lightly under saddle. I contacted Cathy once again and she came out to work with us Even though I was confident in my horse, I wanted her professional opinion to be sure that he was ready to accept a rider. 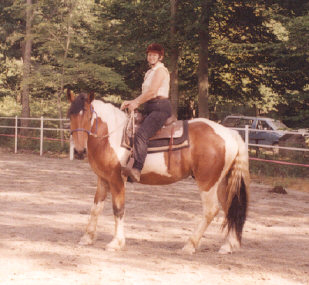 When Cathie arrived, she had me work with AJ a bit to see how we were together; she then proceeded to work with him herself, since she would be the one to get on his back, he needed to respect her too! NOT! He wanted no part of this stranger telling him what to do! BUT, that didn't last long.

In no time she had his total attention and respect; saddled him, and hopped on! It was so wonderful to see. He was so TOTALLY relaxed he looked like he had been ridden all his life. She clucked at him, told him to walk-on and off they went at that ever-so-slow draft horse pace, head and neck low and relaxed! In fact he was so relaxed that she took him out on to the street for a short ride. I also got to hop on that day for a short pony ride.

We have ridden once a week for the past few weeks and it has been great! One more perk was that the join-up session that she worked on with him he TOTALLY got it, now when I work him in the arena, I have his attention on me at all times! ITS SO GREAT! Cathy will be back to put the first trot on him in a few months, then its on to trailer-loading 101!" Nancy Perry - Berkley, MA 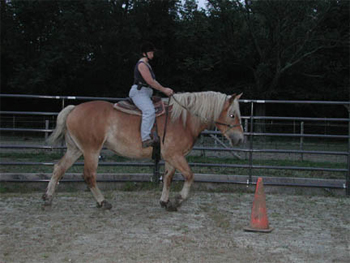 This is Willow, our 17.2H Belgian mare. She is 4 years old and we are just starting her. Cathie put the first ride on her on 9/15/04. Already a nice, low headset!
Lisa Benoit Cumberland, RI