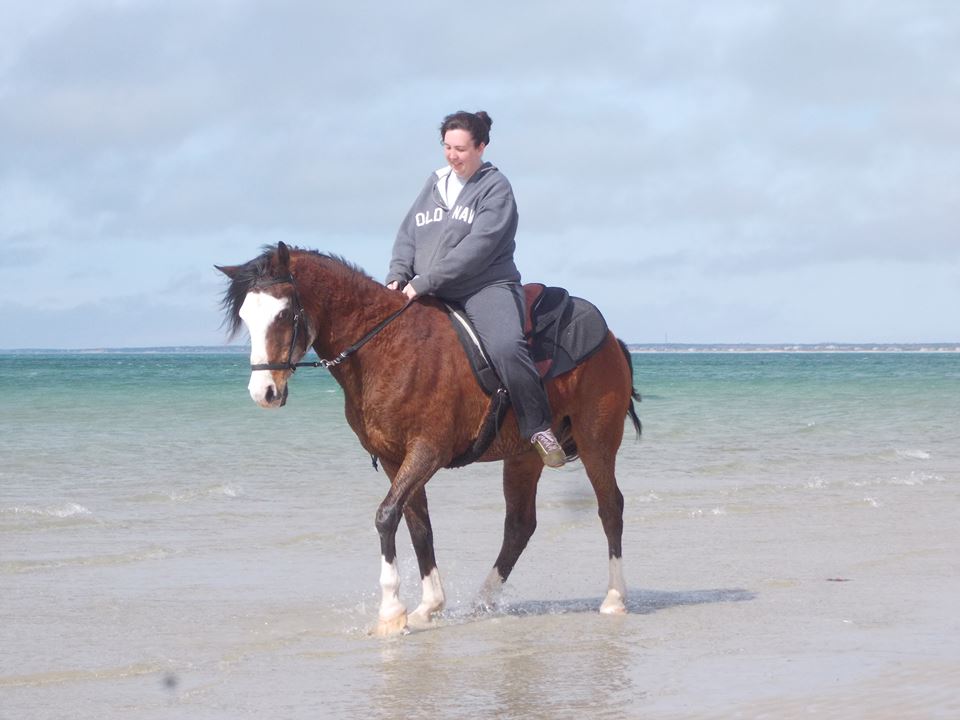 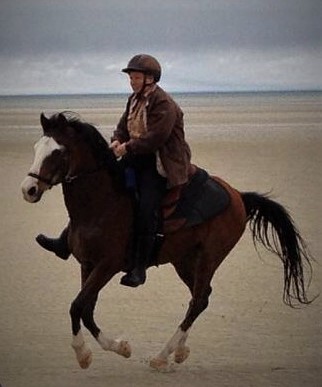 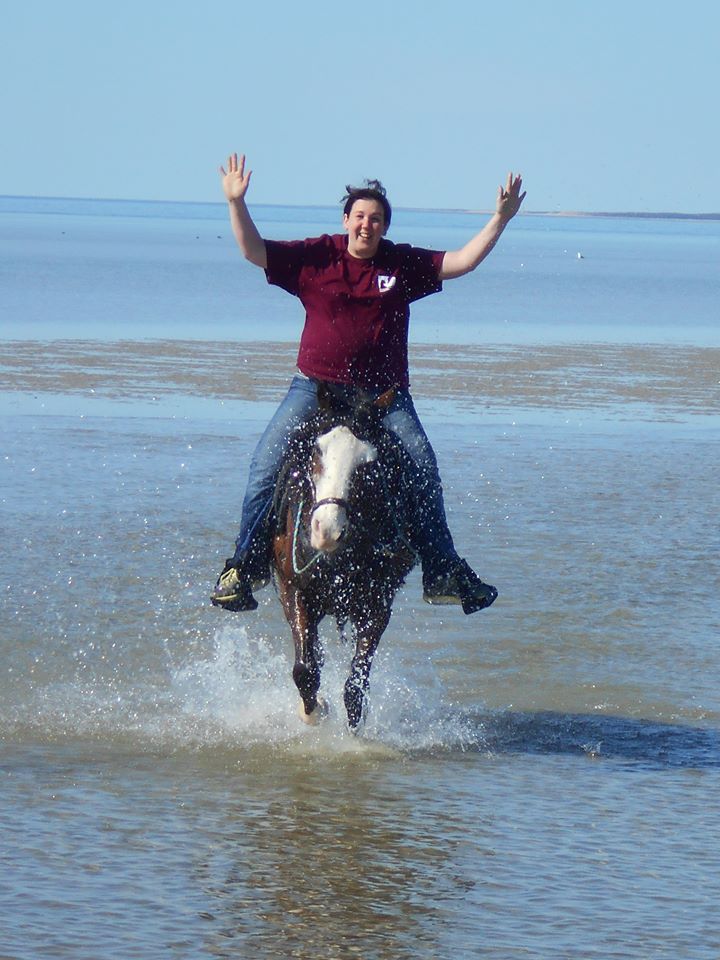 I was very skeptical at first when Cathie first mentioned going bitless 5 years ago. You see my boy was an old man at the age of almost 30 yes that's right 30! Being an Arabian.... he was still full of spirit and more go than whoa. We were at the Cape for a girl’s beach riding weekend and she talked me onto trying it. I said sure go for it, but you’re getting on him and trying it yourself lol you see Tippy loved the water and loved to run I thought for sure there was no way she wasn't going for an uncontrollable swim. But, I was wrong... very wrong. Tippy did amazing and was happy and that made me happy. Cathie turned me into a believer that anything is possible with the right teacher. From that day forward my boy never again had a bit in his mouth. My wonderful boy left this world in his mid-30's and I’m at peace knowing at least for the last few years he never had to ever experience mouth pain again. I now have a feisty haflinger Heinrich that also since I've owned him 2.5 yrs. is also bitless all thanks to cathie! I honestly can't say enough about what a wonderful person, trainer and friend Cathie is     Christie Miller

Cathie's note "I had just met Christie that day at the beach. I noticed her lovely horse was anxious and very hot, I wanted to help them both. I tested him out in the parking lot by our trailer that was parked at the beach, and everything worked great!  lateral flexion for one rein stop,  rein back, and his brakes worked fine so off we went. What a joyous time we had! It's never too late to transition your horse. Cathie Hatrick-Anderson 5-1-2019

I had the good fortune to bring my horse to 2 clinics with Cathie. The first clinic I brought along my own brush & branches to show Cathie the fear my horse was dealing with. By the end of that day he was confidently walking and standing on top of the branches! Away I went with some new tools, set up a few of my own obstacles at home and continued to build upon the foundation that Cathie helped establish. Two weeks later we attended our second clinic where we continued with ground work and then moved to under saddle work – when I bought this horse just over a year ago, I had transitioned him from a shank bit used by his previous owners to a D-ring snaffle with a lozenge which he just leaned into. Cathie replaced my bridle with a Dr. Cook Bitless Bridle™ and after a few minutes of work I was amazed at how much softer and responsive my horse was in the bridle and in his body. I am a massage therapist for both humans and horses and I was amazed to see the usual muscle tension he holds in his ribs melt away and soften as the work progressed. He was so relaxed and responsive once I was back in the saddle that I had the confidence to pick up the canter. Upon arriving home, I placed an order for The Bitless Bridle and am anxiously awaiting its arrival! Thank you Cathie for helping both me and my horse, I am looking forward to our next lesson. Bettyann Cernese. 9/24/13

Since Smokin' and I had the pleasure of working with Cathie he is an even better horse than when he was initially given to me.  Smokin' stands while I mount him and waits until I ask him to walk on. He stops when I ask him to stop. A few times now when he's gone to spook and bolt I have immediately been able to stop him using the one rein stop technique.  I highly recommend working with Cathie and the bitless bridle. Faith Muello Szczurko 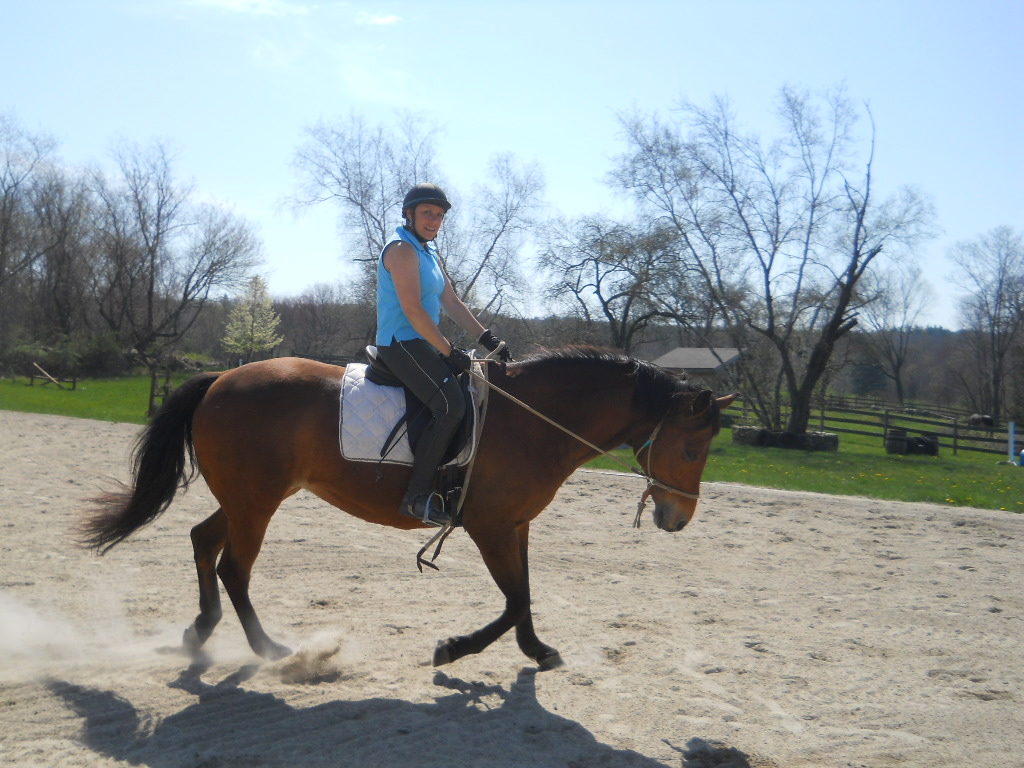 I had never used a Bitless bridle until I took lessons with Cathie.  I see a huge difference in my horses behavior when riding.  She is more relaxed and has more energy. Her overall expression is softer and lighter.  She has a tendency to be stiff going to the right, and hanging on the inside rein.  Using the rope halter and the bitless, she has made tremendous improvement.  It’s much easier for her to soften to the pressure from the bitless compared to the bit.  I am very grateful for having the opportunity to work with Cathie. Lisa Jones

To see the pair in action 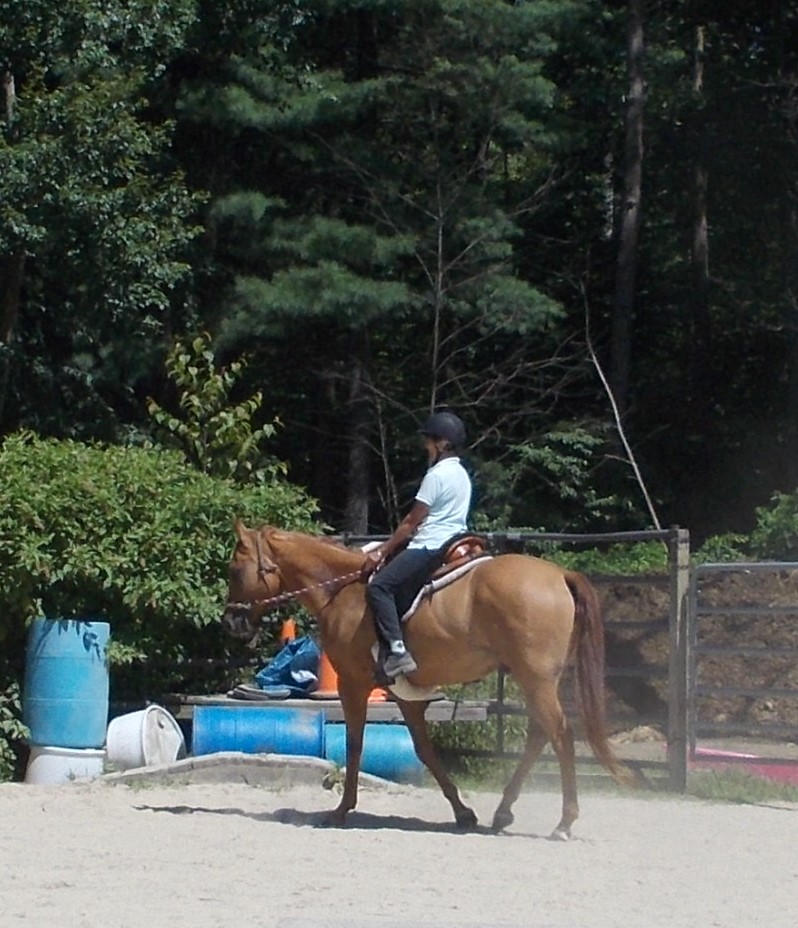 Last week Waylon and I traveled to Bobcat Farm and had another invaluable training session, including our initial experience using the bit less bridle. We practiced all we had learned previously and Cathie helped us fine tune our skills. (Mostly mine since Waylon now knows what is expected!) Since we trail ride and Cathie has a wooden bridge, I requested we see how he would do with it. Cathie showed me when to back off if he was trying so he'd know that was all we expected. And then, because he wasn't forced, he did it!
Waylon is fussy with a bit so I wanted to try riding with a rope halter or bitless bridle. We did both and it was Amazing! He was so relaxed and responsive almost immediately.
I can't thank Cathie enough for helping me with the transition with my new horse. Understanding how and when to apply pressure, and when to release it, is so extremely important. Cathie teaches with such common sense, and it's the best way. Thank you, Cathie!     Pam Johnson - MA 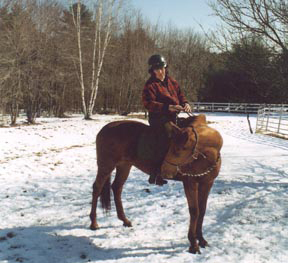 Cathie is helping me with my thoroughbred Sebastian and she is doing great with him and me. (confidence) The reason why I was so attracted to Cathie was her mention of the bitless bridle on her website. This is the first time I found someone who knew about it. I've ridden with the bitless bridle for about three years. If any of you ever decide to try it, I guarantee that your horse's behavior will change for the better. Try it out in a ring, or longe your horse in it just to see how he goes. You will have so much more control and a much calmer and happier horse. Cathie also introduced me to the rope halter for trail and I love that too. Susan Scott Belchertown MA.

(Susan was already in Dr. Cook's bitless bridle but her horse still had many issues, crossing water and bridges, she could NOT find a trainer that would entertain the idea of riding an Thoroughbred with out a bit in his mouth). We traveled miles away from her house I never wished I had a bit in his mouth.

I’ve had horses all my life but learned unexpected and valuable things from Cathie Anderson. She has wonderful gifts of perception and observation, a deep body of knowledge about horse behavior and a gentle spirit and common sense that enable her to reach out to the inner-horse and the inner-owner alike, both of whom can be confused, unschooled and frightened. She introduced my quarter horse gelding to a bitless bridle generating an almost instantaneous and palpable response – something that I would have considered marketing hype had I not witnessed it myself. In the wake of only a few visits he had come into his own in a variety of ways, including becoming much more demonstrative and attached to me. My other fellow is a good-natured and very smart draft cross who before coming to me had made his way in life by throwing his substantial weight around. It is a pleasure to handle him now. He pays attention, anticipates and does what is asked of him -- all on a loose line. And in the process he has become a much more trainable horse. Barbara Palmer No picture available.

I have so many success stories if yours is one I would love to add it here.